The History of Cosmetics 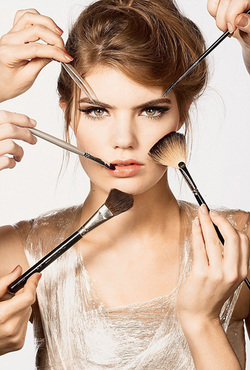 The history of cosmetics spans at least 6000 years of human history, and almost every society on earth. Early major developments of cosmetics include the use of castor oil in ancient Egypt as a protective balm and skin creams made of beeswax, olive oil, and rosewater described by the Romans. The Ancient Greeks also used cosmetics. Cosmetics are mentioned in the Old Testament—2 Kings 9:30 where Jezebel painted her eyelids—approximately 840 BC—and the book of Esther describes various beauty treatments as well. Cosmetics were also used in ancient Rome, China, Japan, many African and European countries, and now, here in America.

The cosmetic industry in America was greatly influenced by the movie industry in Hollywood. Modern synthetic hair-dye was invented in 1907, and sunscreen in 1937- both by the founder of L'Oréal, Eugene Schueller. Cosmetic deodorant was invented in 1888, by an unknown inventor from Philadelphia.

Today, we can see that using cosmetics is a part of almost everyone's daily routine. Although modern make-up has been used mainly by women traditionally, gradually an increasing number of males are using cosmetics usually associated to women to enhance their own facial features. Cosmetics have become something many of us take for granted during modern times, with such a plethora of brand, color, fragrance options, online and in-stores. Not to mention the standards that our media sets for so many young girls to meet, all by applying cosmetics, which can greatly contort their self-esteem.
UA-34059583-1